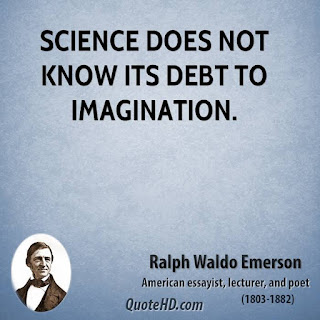 The argument is drawn:  Seeds or No Seeds..
Darwin versus Agassiz..
Emerson and Thoreau..perhaps surprisingly (?)..
became grounded in Seeds: the evolutionary story
which has remained strong..perhaps until now..
"Agassiz was wrong and Thoreau was right."
Consider..in the quantum era now emerging
No-Seeds is gaining persuasive traction and
Seeds is assuming a more relative role..
Seeds and evolution are burdened with time
and independent time is illusory in the
quantum reality..in our Conscious experience..
In other words..No-Seeds or No-Thing is the
reality we experience..and the Seeds and those
many things simply vibrate within..and as
the No-Seeds consciousness..
In other words:  Agassiz and Darwin each
possessed  half-truths..leading to confusion
of years of either-or thinking..

"Spontaneous generation" is the Big Bang..
which evolves and unfolds...!
~~CC

Friends of Emerson will meet from 4:00-5:00 on May 11 in the FCC Chapel.  We will continue reading The Method of Nature beginning with "In short, the spirit and peculiarity of that impression . . .”  (Lucy Bell's bi-weekly reminder!)

Emerson will again use the word ecstasy and follow a little later with another ode-like lyrical passage.

The scientist who I was trying to recall last time who favored the permanence of species over evolution was Louis Agassiz.

I taught a class on this once, and I’d like to share some of the notes below.  I think it’s relevant to our reading of The Method of Nature, because Emerson shared Thoreau’s opposition to Agassiz.

Henry David Thoreau: 1817-1862 ,Louis Agassiz: 1807-1873 , Charles Darwin: 1809-1882
Louis Agassiz
Born 1807 in Switzerland, Doctorates in science and medicine.
Published 5 volume classic on fossil fishes.
Other works: geology, paleontology, glaciation.
1848 began teaching at Harvard. Recruited people world wide to collect specimens for him.  State Department supported him in this.
One of his many publications was a book titled Principles of Zoology.  In it Agassiz maintained that species are fixed and unvarying.  All species were created in waves over time by a deity according to a fixed plan of creation.  Calvinistic determinism was his religious belief and he applied that to science.  This was the exact opposite of Darwin.
Thoreau Connection
He was one of the many specimen collectors for Agassiz, sent him fish, turtle embryos and other specimens from the Concord area. He studied Principles of Zoology. He met Agassiz and dined with him at Emerson’s house in 1857.
Thoreau had read other developmental theorists before Darwin and never accepted Agassiz’ permanent species theory.
Agassiz believed in “spontaneous generation”.  In the same way that animals appeared in different places over time, plants sprang up without benefit of root, cutting or seeds.  This was a common idea of the time held by many scientists as well as Agassiz.
In “The Dispersion of Seeds”, Thoreau argued against the spontaneous springing up of plants.  He did careful observation and record-keeping of how seeds were dispersed by wind, water and animals.
He said: Though I do not believe that a plant will spring up where no seed has been, I have great faith in a seed.  Convince me that you have a seed there, and I am prepared to expect wonders.  (Love this quote,)
In Faith in a Seed, Bradley Dean makes this commentary: As the years passed, Thoreau came to doubt Agassiz’s well-known belief in the permanence of species.  Agassiz was a famous European scientist, a magnetically compelling teacher and lecturer, a scientific empire builder, the darling of Harvard and the rising federally funded science establishment.  Agassiz was the most powerful scientist of his day, whereas Thoreau was a minor—if reputable—local naturalist.  Yet on the big issue Agassiz was wrong and Thoreau was right.   Faith in a Seed p.8.