To get this blogsite started, the concept of polarity is the centerpiece.  The Torah quote above provides the basic Formula for polarity.  In the writing, The Kybalion by the Three Initiates, which portrays the teachings of the legendary sage, Hermes Trismegistus, we find:  "Everything is Dual; everything has poles; everything has its pair of opposites; like and unlike are the same; opposites are identical in nature, but different in degree; extremes meet; all truths are but half-truths; all paradoxes may be reconciled.".  These fractal iterations of the basic Formula amplify the meaning of polarity...a very simple and profound topic, and a critical aspect of our consciousness...
.
Polarity relates to who we are as human beings, and is the structural pattern of the universe and all its sub-sets and components.  Polarity is evident in the holistic modern sciences: quantum mechanics, fractal geometry, dimensionality, left-right brain hemispheres, and gender differentiation.  A continuing, or even occasional, awareness of polarity contributes to a more satisfying and joyful existence.  It eases the stress resulting from our attempts to base our knowledge and understandings upon a flood of information, facts and concepts--which are both gifts and burdens of our modern age.  An awareness  of polarity is no less than an awareness of our consciousness, and is available to each of us to experience.

Recognition is the key!

The title of this blog, "Polarity in Play" is a play on the word "Play."  The two opposites, which
make up the poles of a polarity (light and dark, masculine and feminine, above and below, foreground and background, spirit and matter,, and what you can name as your own polarity!,  are in a playful dance with each other.  Their relationship may be attractive or antagonistic, but the poles are inextricably and always related to each other.  There is a unity or wholeness or Oneness which, upon reflection, always envelopes and contains any  polarity.

There is, in our time, an urgent need for a recognition of consciousness.  Polarity is perhaps the most powerful of entryways. I will leave it there for now--revisions and extensions to the above will undoubtedly be necessary, but this is a start. I hope that contributions from those of you who make up the interconnections (synapses and dendrites) of an internet consciousness will help to build dialogue based upon your own polarity of Being and becoming. 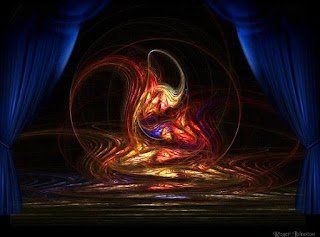