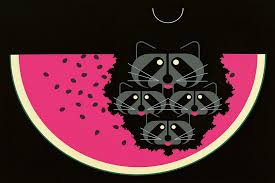 Charley Harper
is my example..
His animal forms are
minimal and simplistic..
(you can google his name..!)

Charley was a forerunner of
consciousness-only awakening
which is today offered as a
paradigm of hope..

Each life form
bird animal insect tree
expresses and abides
in something more..

Essence is consciousness
manifesting within itself
a plethora of forms with
geometric brushstrokes..

This artist's stroke finds
our commonality in beauty
the recognition for which
each of us longs... 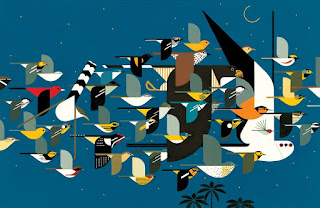 The paintings of Charley Harper (American, 1922-2007), a lifelong conservationist, have delighted art and animal lovers for more than six decades. With his distinctive use of geometric shapes, patterns, and vivid colors, Harper distilled the essence of each bird, animal, insect, or tree to its most important details--as he said, "Instead of putting everything in, I try to leave everything out. I call it 'minimal realism.'" Harper's paintings and posters have been published by a variety of nature- and conservation-oriented organizations. With his elegant, minimalist method of depicting wildlife, Harper transported viewers into the natural world via lively but self-described "flat" images. His paintings of various ecosystems and, above all, brilliant birds, emphasized hard-edged simplicity.
(Amazon summary)