THE WINTER OF LISTENING
(excerpt)
What is precious
inside us does not
care to be known
by the mind
in ways that diminish
its presence.
What disturbs
and then nourishes
has everything
we need.
What we hate
in ourselves
is what we cannot know
in ourselves but
what is true to the pattern
does not need
to be explained.
Inside everyone
is a great shout of joy
waiting to be born.
David Whyte

The foundations of good poetry lie firmly in the invisible and the unspoken,
and through the tending of what seems at first just a whisper, through our breathing and then speaking from that inner source, we reestablish ourselves at the surface, verbally and consciously on a new frontier, a frontier that strangely, an essential part of us has already been inhabiting for years. This is the foundation of political ‘Free Speech,’ this is ‘healing’ in the true poetic sense, the reconciliation of what has long been known in some far inward reach of the psyche with the new political and seasonal changes occurring in the outer world.
As each succeeding cycle of change approaches its end we almost always realize that the very changes we have long been attempting to make, stop or delay all actually happened earlier than we care to admit, and are firmly and irrevocably in place. Part of the reverie we engage in after any escape from a confining relationship, an imprisoning job, a place we should not have made our home, is finding on reexamination, just how early the early signs were, how loud the voice was, telling us we needed to leave or resign or move. We simply would not allow our selves to hear or speak the truth to dreams that once held such promise, struggling as we did to live out our hopes and arrange and secure our lives on the surface.
These hidden and unspoken dynamics can break through to the controlled surface in difficult and destructive ways if held down through too many seasons of an individual or societal life, desolating and destroying any firmly held views of what we thought was good, right and true. It is the adolescent’s way of making changes, breaking the surface lock through trauma, drama and disappointment, but an adolescent dynamic we all can carry through into our mature years if we do not learn to speak from what Wordsworth called, “A dark invisible workmanship, that reconciles discordant elements and makes them move in one society.”

In many ways the last election represents this adolescent breaking through of hidden unspoken forces through a locked and repressive exterior form. The gridlock was not just in Congress, but in the whole bankrupt almost oligarchical political process that had served its time, and the way all of us have been sustaining the lock though our self-referencing communities of mutual agreement. The representative who has ridden the wave of those forces to the presidency may exhibit many of the characteristics of an adolescent himself, but the forces and necessary conversations his emergence represents are no less real and are something any mature mind should consider. His emergence points toward a chaotic turbulence followed by a new order, an order we need to be extremely vigilant in helping to shape no matter whether we have called our selves liberal or conservative or something in between. One thing is certain, those who elected him will be just as disappointed and sometimes horrified as those who now oppose him, while those who voted against him will be surprised and sometimes a little disorientated by the dismantling of previous imprisoning norms they are glad to see gone.
None of us know what lies ahead, we could be in for four bumpy, very disturbing but at times, strangely gratifying years, we could also be seeing the attempted rise of Fascism in America, with all its disdain and oppression of individual rights and the rights of minority communities. This is a crucial threshold that requires all of us to be in the conversation, all of us to be just half a shade braver, half a shade more willing to meet the ‘other’ in our societies, including a previously middle American society that now itself feels marginalized; half a shade more willing to speak from emerging uncertainties into public forums, rather within our familiar communities of locked-in demands and dogma.
American or not, no matter where we live, we are all on this planet tending to live and converse in our own self-reinforcing echo chambers on all sides of the political equation, we all act as if our version of the future is the only one that should prevail. Dominated by the very gadgets and social media platforms that are supposed to facilitate communication, none us have been having a real conversation. Otherwise we should not have been so surprised, as we were on both sides, by this result.

We live in a time where each of us will be asked to reach deeper, speak more bravely, live more from the fierce perspectives of the poetic imagination; find the lines already written inside us: poetry does not take surface political sides, it is always the conversation neither side is having, it is the breath in the voice about to discover itself only as it begins to speak, and it is that voice firmly anchored in a real and touchable body, standing on the ground of our real, inhabited world, speaking from a source that lives and thrives at the threshold between opposing sides we call a society.

Sometimes everything
has to be
inscribed across
the heavens
so you can find
the one line
already written
inside you.

from "The Journey"
River Flow: New & Selected Poems
and The House of Belonging 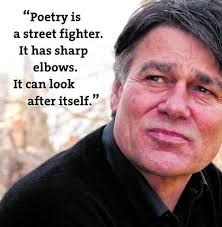