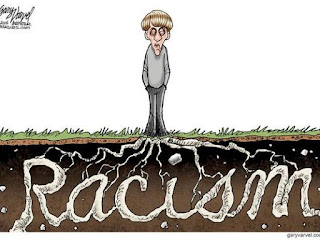 rac·ism
ˈrāˌsizəm/
noun
1.            the belief that all members of each race possess characteristics or abilities specific to that race, especially so as to distinguish it as inferior or superior to another race or races.

is reaction to perceiving of differences
differences which divide the whole
into illusionary separate parts
each part believing separation
finds a home in separation..
how to recognize we ask
that home is in the whole
and joyously that
the part is made of
the whole...
Posted by Charles Coon at 8:35 AM