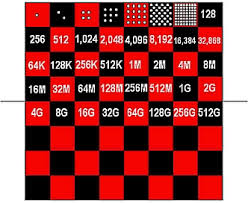 One and duality
duality finds exponents

Perhaps very soon
perception will shift
observers will claim
their reality link..
Masquerading duality
its mask removed
will astound us revealed
as never other than one...


Business Insider — June 9, 2015 | Drake Bear
Humanity has a problem. It’s linear. Technology, on the other hand, is exponential. Take it from Ray Kurzweil, the bestselling author, futurist, and Google chief engineer.
The tale of the inventor of chess and his patron, the Emperor of China: In response to the emperor’s offer of a reward for his new beloved game, the inventor asked for a single grain of rice on the first square, two on the second square, four on the third, and so on.
The emperor quickly granted this seemingly benign and humble request. One version of the story has the emperor going bankrupt as the 63 doublings ultimately totaled 18 million trillion grains of rice.
At ten grains of rice per square inch, this requires rice fields covering twice the surface area of Earth, oceans included. Kurzweil contends that we’re in the middle of that chessboard. [...]