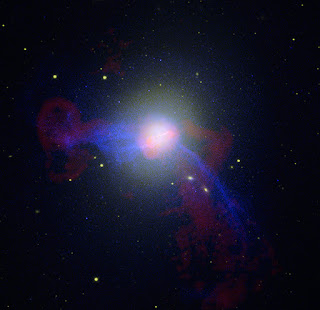 Matter is one part and mind the other
of the duality which
many consider unquestioned reality..
Now a science theory finds this
unimaginable hole is made of
warped space and time..
Einstein's unity of spacetime
seems now as the new matter
discovered by older dualistic mind..
A new warped structure reflects
what before this mind has seen
but with time  flowing to demise..
Perhaps that for which we are waiting
is the collapse of matter and mind
into each other forming a new
Matter in search of a new Mind...

"A big misconception is that a black hole is made of matter that has just been compacted to a very small size. That's not true. A black hole is made from warped space and time. It may have been created by an imploding star [where the gravity becomes so concentrated that nothing, not even light, can escape]. But the star's matter is destroyed at the hole's center, where space-time is infinitely warped. There's nothing left anywhere but warped space-time.

"A black hole really is an object with very rich structure, just like Earth has a rich structure of mountains, valleys, oceans,and so forth. Its warped space whirls around the central singularity like air in a tornado. It has time slowing as you approach the hole's edge, the so called horizon, and then inside the horizon, time flows toward and into the singularity [the central spot of infinite density and zero volume], dragging everything that's inside the horizon forward in time·to its destruction. (The Daily Galaxy)
Posted by Charles Coon at 8:58 AM