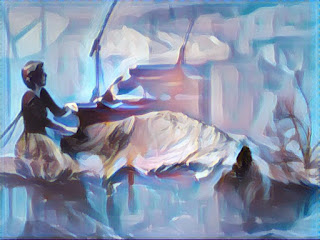 The non dual way says that the "me" (separate self) and the "other" are illusory concepts, and love and freedom are found  by recognizing the illusion  The dualistic way says the story of me and the other constitute reality..which brings about "relationships," expected suffering,  and separation assumptions about everything..which the non dual way would say is the dream. Apparently.  However, might we recognize that duality can be expressed either as independent reality, or as a non dual "appearance."  Nonduality appearing as everything.  Importantly..no right or wrong expressions in "everything." But we can also say that all of this stuff amounts to conceptions, thoughts, interpretations..all of which happened in my writing, and in your reading.  Appearances all..!  And all perfect and whole. This!  This is the spontaneous message of Nothing/everything, considered to be radical Neo-Advaita by some, but simple and directly fulfilling by growing numbers of discoverers.