What especially stands out to this writer (and classmate, Charles Coon) is Fred's exemplary self-fulfilling service after retirement, for our veterans, especially those whose lives were most painfully interrupted by their own service to our country. His passion for such service also overflowed into various activities involving the handicapped.  Upon his retirement he worked as Associate Executive Director of the Paralyzed Veterans of America in Washington, DC and served as Chief of Staff for the National Victory Celebration, welcoming home the troops from the Gulf War. He was a Director on the Board of Governors of the World USO, and was Chairman of the Human Resources Committee and a member of the Executive Committee for more than four years. He was also a member of the Board of Advisers of National Handicapped Sports. His service to America's veterans was recognized by the American Legion, the Veterans of Foreign Wars, the Paralyzed Veterans of America and the Disabled Veterans of America. Fred's passion for our veterans did not end with his death, as noted by his family's request that contributions be made to the Wounded Warrior Project, in lieu of flowers.  Apparently, compassion was a driving motivation in his life, which came to special fruition during his retirement years.  So, what led up to this most notable service during retirement?  We find that his earlier years were times of accomplishment, movement, and preparation!

Ferdinand Clarence Bidgood Colonel, U S Army Retired, May 28, 1938 – September 27, 2015.  Fred was born at the station hospital at Fort Benning, Georgia, the son of LT Clarence Bidgood (USMA 35') and Isabel McKee Bidgood. In 1955 he graduated from Central High School in London, England, spent a year at Braden's Preparatory School in New York, and entered West Point with our class of 1960. Upon graduation in June he was commissioned as a 2nd Lieutenant in the Army.  He served throughout the world in command and staff positions in both the Artillery and Corps of Engineers. He received a Bachelor of Science degree from the Military Academy, a Masters degree in civil engineering from Texas A&M, and is a graduate of the Armed Forces Staff College. His final military assignment was as Executive Assistant to the Administrator of the Veterans Administration, which provided an entryway to his post-retirement service, portrayed above. His military decorations include four awards of the Legion of Merit, the Bronze Star, two awards of the Meritorious Service Medal, the Air Medal, and the Army Commendation Medal.

In addition to his notable achievements described above, a sketch of his life must also include something of his engaging personality, and his relationships with all of those persons who touched his life.  His days at West Point were marked with sports portraying his athletic prowess (swimming, water polo, and cross country running). A musical talent featuring his rock-and-roll guitar, and  a great sense of humor, provided entertainment and levity for all of us, which made our rigorous lives at the Academy a bit more pleasant. Fred's athletic life continued as an avid golfer and a longtime member of the Army Navy Country Club, where he was twice the senior club champion!

Finally, and likely most important, Fred married the love of his life, Marilyn Louise Clark, on July 9, 1960 in Rutherford, New Jersey.  The marriage was blessed by 55 years of togetherness, with their family of two sons, Mark (wife Lori) and Matthew (wife Nora), and beloved grandchildren Damon, Haley, Aidan and Brianna.  Fred was preceded in death by a daughter, Kerri, in 1965.

A funeral service was held in the Old Post Chapel at Fort Myer, VA on Wednesday, February 24, 2016.  Interment with full military honors followed at Arlington National Cemetery, and a reception at Fort Myer's Officers Club after the conclusion of the service. In lieu of flowers, the family requested a memorial contribution in Fred's name to the Wounded Warrior Project, a fitting tribute in itself. 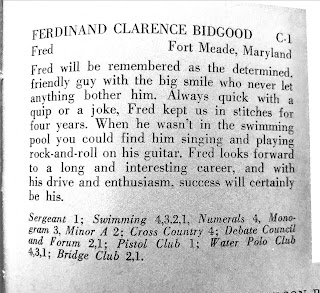 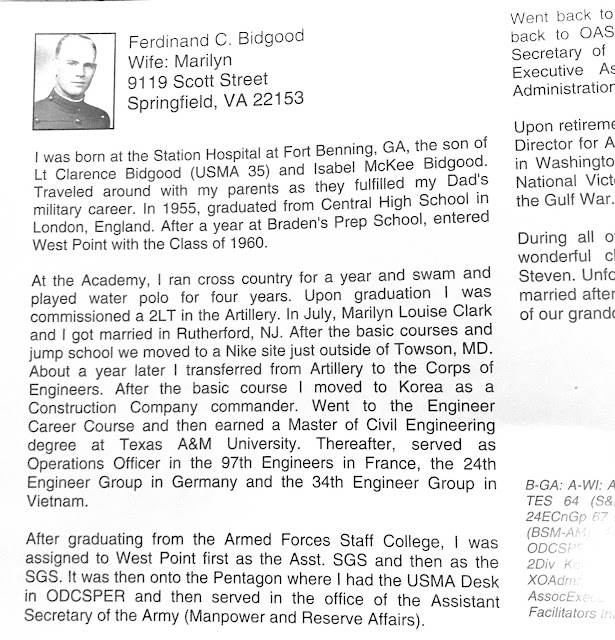 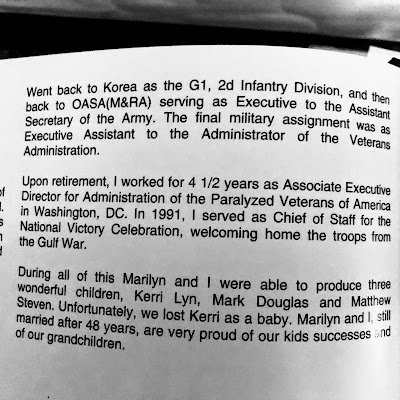 Chuck, Dave and the other Frank,
Chuck, thanks for the informative response and update on Walt Wilson.  We can put his situation in the “inactive file”.  Thanks also for pursuing this so diligently.
Regarding Fred Bidgood.  I agree it would be nice to “get some life” in his MA from company mates.  Unfortunately you and Dave Byrnes are the only two who have ever responded to my current and past pleas. (Dick Walters did comment on Joe Felber’s MA which I wrote.)  Let’s talk about who can take the lead on doing Fred’s.  From my perspective, we are limited to the howitzer, the 50-year book and his obit.  My howitzer was lost so I don’t have the full deck.  I do have his obit which is attached.
Regarding Jerry Lewis, Frank Cloutier says he has a copy of his MA  which I have asked for.  I also attached his obit to this message.  I would be happy to take care of his MA if I could get a copy of the howitzer write-up. Can one of you scan that for me?