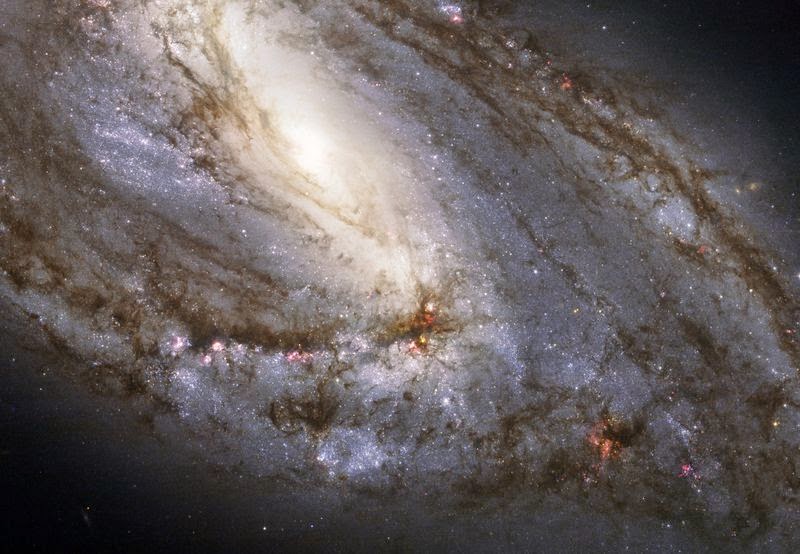 Out there and away
expansion is accelerating
so we speculate
when does expansion
accelerate to light..?
Light which can now
be understood as
both far out and in close
with vibrating variations
seeming as
entering and exiting
heavy blackness..
And new realizing:
It's all right
It's all light..!


Equipped with his five senses, man explores the universe around him and calls the adventure Science, wrote Edwin Hubble. "At the last dim horizon, we search among ghostly errors of observations for landmarks that are scarcely more substantial. The search will continue. The urge is older than history. It is not satisfied and it will not be oppressed. The history of astronomy is a history of receding horizons."
During the past several years alone, the Hubble has delivered a goldmine of discoveries: from the mapping of cosmic-web of dark matter, to rich tapestries of evolving deep-space galaxies, to the very dawn of galaxies using mankind's deepest optical view of the universe, to evidence for Dark Energy in the young universe from Hubble Ultra Deep Field, to compelling evidence of monster black holes at the centers of galaxies....
Hubble's great breakthrough came in 1923 when with a fresh eye he showed that a distant cloud of that peripheral celestial gas in the Andromeda Constellation known as M31 wasn't a gas cloud, but a maze of brilliant stars, a "nebulae" (Latin for "cloud") -a galaxy a 100,000 light years across and at least 900,000 light years distant from Earth.
This discovery led to his 1924 research paper "Cephids in Spiral Nebulae" (Hubble's term for galaxy) showing that the universe -which we now know houses some 130 billion galaxies- was made up of not just the Milky Way, but a myriad of "island universes," many far more distant and larger.
Hubble then turned to the next question of equally cosmic proportions,just how big is the universe, and made an equally striking discovery: that all the galaxies except for our local cluster are moving away from us at a speed and distance that are nearly proportional. In short, the more distant the galaxy, the faster it was moving.
The concept of an expanding universe destroyed the old, longstanding notion of a static steady-state universe, the wonder of which Stephen Hawking has exclaimed, was that it wasn't obvious before that a static universe would have collapsed in upon itself.
Hubble's ignorance of Einstein's General Theory of Relativity led to his nor being able to connect the dots between a universe that was expanding evenly in all directions (the "Hubble Constant") to a geometrical starting point, a "primeval atom, a Big Bang....

The Daily Galaxy via Hubble.org and ESA

The restless, curious, ever-questioning human mind… every new door we open leads to new explorations, new questions, new discoveries, and more doors. At the heart is always being willing to question what we think we know, for as Proust would say, “The real voyage of discovery consists not in seeking new landscapes, but in having new eyes.” And nowhere is this more true than of the journey inward.