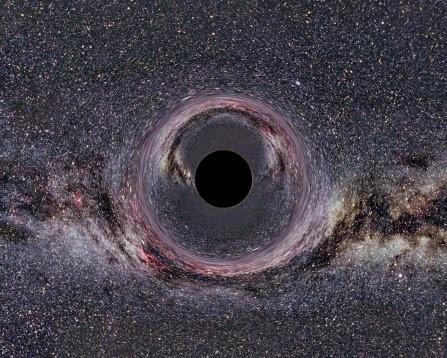 More than a mystery of nature
these severe compressions show us
the extremes of the seeming separate self
of the ego triumphant..
Not separate though but as we
embedded in consciousness whole..
The black hole waiting for evaporation
and  new awakening
as a wave in the ocean
as we in our longing
find Real composition...

(Imagine the scene: highly advanced civilisations get enormous amounts of energy from black holes, be it extracting it from collapsed stars or making artificial mini-holes that power spaceships. How feasible might it actually be to tap these cosmic behemoths for power one day? Black holes are stars that have burnt out and collapsed under their own gravity to an infinitesimally small point in space – a singularity. Inside the so-called event horizon, even light is trapped by a huge gravitational pull. But that view evolved once Stephen Hawking and others brought quantum physics into the mix. Hawking showed in the 1970s that black holes should emit energy from their boundaries in the form of radiation produced by quantum fluctuations of empty space itself. Eventually the black hole radiates itself away – it evaporates.(excerpts from BBC article, December 3, 2013 by Philip Ball)