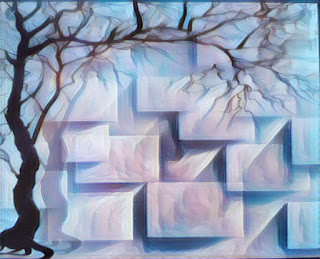 A great reminder from Unmani!
"Oneness loves to dance as if there are two"
"The reality of Life is one paradox after another.
We will never understand it, no matter how hard we try.
Recognizing that I am Nothing is not the whole picture,
just as recognizing that I am Everything is not it either.
It is both, absolutely simultaneously –
and that just doesn’t make any sense.
Nothing loves to play as Everything,
Emptiness loves to be filled with something.
No-one loves to play as someone.
Oneness loves to dance as if there are two.
And between these two sides of the paradox,
runs thought, that tries to explain it all.
The nature of thought is to
be the love song of Nothing to Everything;
continually attempting to explain or describe the way it is.
Nothing loving to express itself in this way and that.
The song of non-duality to duality,
of Death to Life,
of no time to the evolution in time …"
Posted by Charles Coon at 10:40 AM