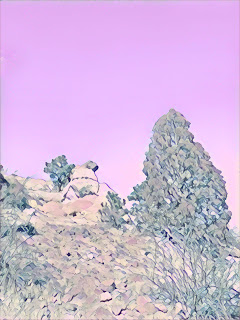 we are these shared learned words. they give an assumed understanding because they all seem to fit together, they all reference one another and form a net of thought, which is really like a net of razors seemingly slicing up this edgeless seamless symphony of perception into separate things and events. finding new words to describe this will not capture anything because there is nothing to capture
shooting stars burn themselves
there is no place to land
nothing to land
love builds a pyre of all that you have ever known about yourself and the world and you are gone
then she lays in her own fire
fire burns itself
life burns itself as it arises
there is no past or future or now
nothing separate from life to capture it
no things to hold
no one to hold on to this obvious magic
this preciousness of life appearing all by itself
as soon as we feel fully separate
around eight
we know this great aloneness
which we try to escape our entire lives
but without imaginary separation
we are not
love is not
there is no awareness of life
and love
and of being aware
the greatest treasure in the universe
is this imaginary division
you are it
you are the unique lens where life gets to taste its own magic
and bask in its own mystery and majesty
~~Nancy Neithercut
Posted by Charles Coon at 3:18 PM