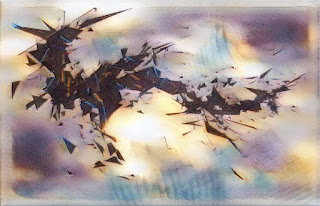 The suffering implodes..strong triggers are these

Passing of jagged dark stories..which have

Managed to transport to oily blackness..

Invitations issued for a nighttime dance...

Hijacking the owner from

Not unlike a religious belief

Wedded to a proscriptive plan

In Washington, rioters, inflamed by unfounded allegations of a stolen election, had stormed the Capitol leaving five dead and triggering the impeachment of a president. Far from Washington, the falsehoods that had whipped so many into a frenzy were wreaking a different sort of chaos; one that was tearing families apart.

Family members spoke of their loved ones as if they were cult members or drug addicts, sucked in by social media companies and self-serving politicians who warped their views of reality. They begged and bargained with parents and partners to put down their phones for just a few days in the hope that the spell might be interrupted and they might return to their old selves.

A woman in Chattanooga, Tenn., was just days away from moving out of the house she and her partner bought five years earlier. “I feel like I’m in a twisted black mirror episode that’s lasting WAY too long,” she wrote. “I feel hopeless that we will ever get back to the beautiful life we shared in our lovely home.”

A woman in Palm Beach, Fla., had gone two weeks without speaking to her mother and was starting to wonder if the rift was irreparable. “I grieve for her every day as if she is dead,” she wrote.

A teenager in Annapolis, Md., worried that she no longer “knew” her father. “I’ve come to the breaking point,” she confessed. “My heart goes out to everyone else in this situation. It really sucks.”

Tyler, alone in his bedroom, read many of the new posts, hoping that they would help him make sense of his mother’s beliefs. Sometimes it felt as if every conversation with his mom and her new husband circled back to Trump-related conspiracies.