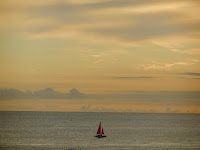 is there something new:
two heads of state..often said to be
unpredictable..even unstable..will
meet concerning an intractable
standoff.. a division decades old..
we know that peace will only arrive
as parties meet knowing shared identity
before discussion of history and fences..
the recognized single identity enters
and shines..recognizing egos as
illusory barriers..yet..let us give
peace a chance..by knowing now:
their shared identity
is mine and ours...


Several readers have shared a report:
North Korea's leader, Kim Jong-un, told President Moon Jae-in of South Korea when they met that he would abandon his nuclear weapons if the United States would agree to formally end the Korean War and promise that it would not invade his country, a South Korean government spokesman said Sunday. In a faith-building gesture ahead of a summit meeting with President Trump, Mr. Kim also said he would invite experts and journalists from South Korea and the United States to watch the shutdown next month of his country's only known underground nuclear test site.

The comments by Mr. Kim were made on Friday when the leaders of the two Koreas met at Panmunjom, a village on their shared border, the spokesman, Yoon Young-chan, said on Sunday, providing additional details of the meeting. "I know the Americans are inherently disposed against us, but when they talk with us, they will see that I am not the kind of person who would shoot nuclear weapons to the south, over the Pacific or at the United States," Mr. Kim told Mr. Moon, according to Mr. Yoon's account of the meeting. It was another dramatically conciliatory statement by Mr. Kim, whose country threatened to do exactly those things during the height of nuclear tensions last year.