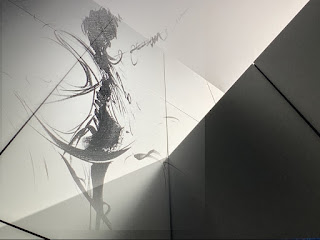 Witches pose the time and place:

And the battle's lost and won..

And forebodings in Scene 1...

Of a brave Macbeth

Who overcame a doubtful clinging

As swimmers choking their art..

We view here the planted seed of

A looming path of destruction...

DUNCAN
What bloody man is that? He can report, As seemeth by his plight, of the revolt The newest state.

MALCOLM This is the sergeant
Who, like a good and hardy soldier, fought 5 ’Gainst my captivity.—Hail, brave friend!
Say to the King the knowledge of the broil
As thou didst leave it.

CAPTAIN Doubtful it stood,
As two spent swimmers that do cling together 10 And choke their art. The merciless Macdonwald
(Worthy to be a rebel, for to that
The multiplying villainies of nature
Do swarm upon him) from the Western Isles
Of kerns and

is supplied; 15 And Fortune, on his damnèd

smiling,
Showed like a rebel’s whore. But all’s too weak;
For brave Macbeth (well he deserves that name),
Disdaining Fortune, with his brandished steel,
Which smoked with bloody execution, 20 Like Valor’s minion, carved out his passage
Till he faced the slave;
Which ne’er shook hands, nor bade farewell to him,
Till he unseamed him from the nave to th’ chops,
And fixed his head upon our battlements.

Tomorrow, and tomorrow, and tomorrow,
Creeps in this petty pace from day to day,
To the last syllable of recorded time;
And all our yesterdays have lighted fools
The way to dusty death. Out, out, brief candle!
Life's but a walking shadow, a poor player,
That struts and frets his hour upon the stage,
And then is heard no more. It is a tale
Told by an idiot, full of sound and fury,
Signifying nothing.
~ William Shakespeare, MacBeth
Folger Shakespeare Library...
https://shakespeare.folger.edu/downloads/pdf/macbeth_PDF_FolgerShakespeare.pdf
http://shakespeare.mit.edu/macbeth/index.html
Posted by Charles Coon at 11:27 AM