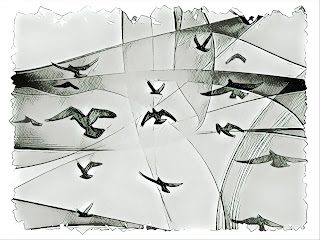 On the feathers of time..

Revealing the wisp of time..

Everything perceived and thought to be known is an illusion constructed by the mind, a fairy tale world of beings and things that are not beings and things at all.  The quantum physicists and the neuroscientists and the nonduality speakers all tell me this, yet they are also illusions. They speak and my mind dances with them, and then they vanish into thin air, their enigmatic smiles lingering a moment like the Cheshire cat, and I run to the mirror and what do I see….?

An imagined Miranda, invented by no one, a fictional character, who one day in an imagined past saw that everything seemed to be a dream I could not remember from moment to moment. It felt as if some strange surreal world was being invented each instant, but I could not find the flow of time. It was beyond disorienting, for I couldn't even locate the center of it all, and yet these made up people and a make believe world appeared.

I was one of the fairy tale characters, and it was always clear it was not my dream. And maybe that world stopped spinning, or really it was like getting on a moving carousel and finding your seat on the merry-go-round horse, and the lights and colors and names of people places and things, the noun-known world, was so clearly a fantasy---I couldn't even say it came from my brain or have any idea from what or how or why....

Yet all these appearances, even now a panorama of seamless perception containing the illusion of separation, seem to happen, and somehow it seems as if there is wine and a glass and a hand reaching out and then drinking, and yet there is nothing at all. Only an unfathomable, ineffable, inexplicable fairy tale fantasy love story that is not even that, or this, or any thing imagined or unimagined at all ❤