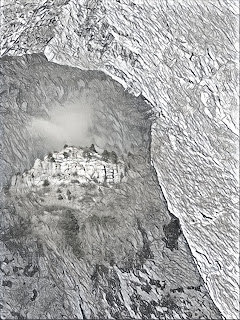 ​
"Apparently . . .
Although there is no such thing as nonduality it seems that there are many different ideas about what it could be.
​
Because the separate seeker experiences everything as a subject object reality it is inevitable that it will see nonduality as a something that can be personally attained and experienced. It will also be seen as a state of no-self that can be taught or energetically transferred.
​
Attempts are made to use the idea of nonduality as a description of the unknown?
​
It is often talked about as a something that needs to be integrated, nurtured and supported?
​
There are even conferences held about its evolutionary development and its possible outcome in another something called the future?
​
It is amazing how many different beliefs and theories can arise about nothing.
​
The term nonduality is just that. It is a term similar to Advaita, and refers to the concept of “not two”. The idea of there being “not two” is attempting to define a mystery. The mystery cannot be named or known, of course, but there are certain descriptions which get somewhere near: the formless form, the relative absolute, the empty fullness or what is and is not, which all defy definition and make no sense.
​
All of these ideas are immediately rejected by the separate seeker who is entirely invested in its own survival and seeks an answer that will satisfy its own experience of reality.
​
Empty fullness cannot be taught or experienced, for how and where would it be found if it is already all there is? Where would there be a place to stand and know or be aware of nothing and everything?
​
However, isn’t it wonderful that the dualistic confusion which surrounds something called nonduality is already empty fullness."
~Tony Parsons~