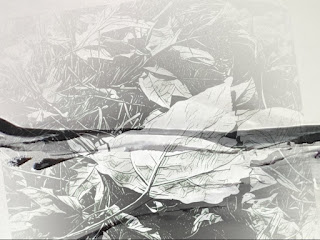 "Images are silent, but they speak in silence. They are a silent language. They are a station on the way from silence to language. They stand on the frontier where silence and language face each other closer than anywhere else, but the tension between them is resolved by beauty. Images and pictures remind man of life before the coming of language.
...

In the ancient languages one notices that the birth of words from silence was not taken for granted but was considered an event of sufficient importance to require a pause in the flow of language before the arrival of the next word. Words were constantly being interrupted by silence. As a river being born receives at every moment waters from different springs, in like manner after every word a new spring of silence flowed into the stream of the sentence.

In the ancient languages the word was merely an interruption of the silence. Every word was rimmed around with silence. It was this surrounding rim of silence that gave it its individual shape, and kept it separate and distinct from all other words, fenced off from them with its individuality guarded by the silence. If there is no silence between words they lose their individual shape and personality. Instead of being persons they become an undifferentiated mass.

In the ancient languages there was a silence in the interval between two words. The language breathed silence, spoke silence, into the great silence from which it came."