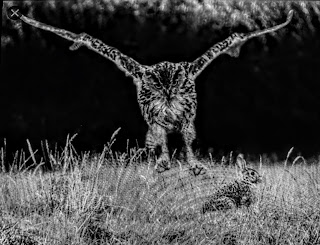 A rabbit's scream in

There is No-thing exterior..

Yet we suffer the rabbit

When the owl is less than exquisitely swift and perfect, the scream of the rabbit is terrible. But the scream of the owl, which is not of pain and hopelessness and the fear of being plucked out of the world, but of the sheer rollicking glory of the death-bringer, is more terrible still. When I hear it resounding through the woods, and then the five black pellets of its song dropping like stones into the air, I know I am standing at the edge of the mystery, in which terror is naturally and abundantly part of life, part of even the most becalmed, intelligent, sunny life — as, for example, my own. The world where the owl is endlessly hungry and endlessly on the hunt is the world in which I live too. There is only one world.

~~Mary Oliver, Owls and other Fantasies...