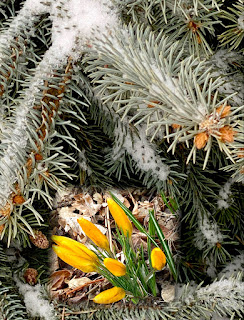 When we try to pick out anything by itself, we find it hitched to everything else in the universe. One fancies a heart like our own must be beating in every crystal and cell, and we feel like stopping to speak to the plants and animals as friendly fellow mountaineers. Nature as a poet, an enthusiastic workingman, becomes more and more visible the farther and higher we go; for the mountains are fountains — beginning places, however related to sources beyond mortal ken.

Later that summer, as he makes his way to Tuolumne Meadow in eastern Yosemite, Muir is reanimated with this awareness of the exquisite, poetic interconnectedness of nature, which transcends individual mortality. In a sentiment evocative of Rachel Carson’s lyrical assertion that “the lifespan of a particular plant or animal appears, not as drama complete in itself, but only as a brief interlude in a panorama of endless change,” Muir writes:

One is constantly reminded of the infinite lavishness and fertility of Nature — inexhaustible abundance amid what seems enormous waste. And yet when we look into any of her operations that lie within reach of our minds, we learn that no particle of her material is wasted or worn out. It is eternally flowing from use to use, beauty to yet higher beauty; and we soon cease to lament waste and death, and rather rejoice and exult in the imperishable, unspendable wealth of the universe, and faithfully watch and wait the reappearance of everything that melts and fades and dies about us, feeling sure that its next appearance will be better and more beautiful than the last.

The universe would be incomplete without man; but it would also be incomplete without the smallest transmicroscopic creature that dwells beyond our conceitful eyes and knowledge… The fearfully good, the orthodox, of this laborious patchwork of modern civilization cry “Heresy” on every one whose sympathies reach a single hair’s breadth beyond the boundary epidermis of our own species. Not content with taking all of earth, they also claim the celestial country as the only ones who possess the kind of souls for which that imponderable empire was planned.

This star, our own good earth, made many a successful journey around the heavens ere man was made, and whole kingdoms of creatures enjoyed existence and returned to dust ere man appeared to claim them. After human beings have also played their part in Creation’s plan, they too may disappear without any general burning or extraordinary commotion whatever.

No dogma taught by the present civilization seems to form so insuperable an obstacle in the way of a right understanding of the relations which culture sustains to wildness as that which regards the world as made especially for the uses of man. Every animal, plant, and crystal controverts it in the plainest terms. Yet it is taught from century to century as something ever new and precious, and in the resulting darkness the enormous conceit is allowed to go unchallenged.

I have never yet happened upon a trace of evidence that seemed to show that any one animal was ever made for another as much as it was made for itself. Not that Nature manifests any such thing as selfish isolation. In the making of every animal the presence of every other animal has been recognized. Indeed, every atom in creation may be said to be acquainted with and married to every other, but with universal union there is a division sufficient in degree for the purposes of the most intense individuality; no matter, therefore, what may be the note which any creature forms in the song of existence, it is made first for itself, then more and more remotely for all the world and worlds.
~~John Muir