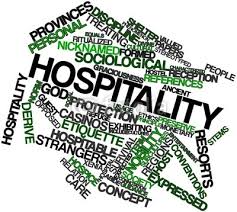 Hospitality as open space
allowing what is here now
That open space is consciousness
it is grace
and knowing this we see
that the boundaries separating
are as waves in the ocean
all Hospitality...!

Hospitality means primarily the creation of free space where the stranger can enter and become a friend instead of an enemy. Hospitality is not to change people, but to offer them space where change can take place. It is not to bring men and women over to our side, but to offer freedom not disturbed by dividing lines.
~~Henri J.M. Nouwen, Catholic priest, professor and writer

To end the misery that has afflicted the human condition for thousands of years, you have to start with yourself and take responsibility for your inner state at any given moment. That means now.
~~Eckhart Tolle, modern spiritual teacher

True hospitality is marked by an open response to the dignity of each and every person. Henri Nouwen has described it as receiving the stranger on his own terms, and asserts that it can be offered only by those who 'have found the center of their lives in their own hearts'.”
~~Kathleen Norris, American poet and essayist

There is an emanation from the heart in genuine hospitality which cannot be described, but is immediately felt and puts the stranger at once at his ease.
~~Washington Irving, 19th Century American author

One great reason why the rich in general have so little sympathy for the poor is because they so seldom visit them. Hence it is that one part of the world does not know what the other suffers. Many of them do not know, because they do not care to know: they keep out of the way of knowing it – and then plead their voluntary ignorance as an excuse for their hardness of heart.
~~John Wesley, Anglican minister, founder of Methodism

The Lord appeared to Abraham by the oaks of Mamre, as he sat at the entrance of his tent in the heat of the day.  2.  He looked up and saw three men standing near him. When he saw them, he ran from the tent entrance to meet them, and bowed down to the ground.
~~Genesis 18: 1-2

Everyone seeks for love as you do, but knows it not unless he joins with you in seeking it. If you undertake the search together, you bring with you a light so powerful that what you see is given meaning.
― Foundation for Inner Peace, A Course in Miracles