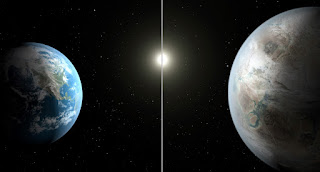 A planetary resemblance
excited some researchers
in the recent urgencies
to find external life..
This fractal discernment
gave a push to similarity
attenuation to difference..
Yet the nondual teaching
finds that difference
is really made of
similarity
coloring its unitive
nature..
Moreover the perceptions
leading to these
pronouncements are
not separate from
a unitive perceiving..
So within the new physics
of consciousness
findings in assumed
duality
stand as diminishing
next to more exciting
realizations...

NASA’s Kepler mission has discovered the first near-Earth-size planet in the “habitable zone” around a Sun-like star. This discovery joins 11 other new small habitable zone candidate planets, marking another milestone in the journey to find another “Earth.”

The newly discovered Kepler-452b, located 1,400 light-years away in the constellation Cygnus, is the smallest planet to date discovered orbiting in the habitable zone — the area around a star where liquid water could pool on the surface of an orbiting planet — of a G2-type star, like our sun. The confirmation of Kepler-452b brings the total number of confirmed planets to 1,030.
(KurzweilAI.net)

"Data from orbiting telescopes like NASA's Kepler Mission hint that the tally of habitable planets in our galaxy is many billion. If E.T.'s not out there, then Earth is more than merely special - it's some sort of miracle."

Seth Shostak, Chief Astronomer, SETI Institute and  and author of Confessions of an Alien Hunter: A Scientist's Search for Extraterrestrial Intelligence.