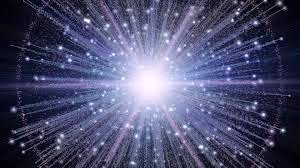 My friend, CharlieP, and I attend a "Friends of Emerson" class every other Thursday.  Last Thursday CharlieP presented me with the paper which is pasted below.  I told him that I would attempt to respond on my blog.  How to respond?

I guess I would have to start with that very small space in which the BB supposedly occurred.  From our earthly viewpoint, the perspective which seems so real, (however, Einstein said was a persistent illusion!), we must admit that the bursting forth of a universe, seemingly without limit, simply boggles the mind, and stretches credibility beyond what we are willing to grant.  We should also admit, however, that this viewpoint assumes that separation is the guiding principle, that the Buddhist's 10,000 things is our starting point.  Separation rules..!  Yes, the mind is boggled..!

What if we were to consider the new perspective of consciousness.  This, I believe,  relates to the quantum reality which was identified by science about 100 years ago.  We might also call this reality the 4th (space) dimension, or "the field," to use scientific terms, but any definition is a limitation, and therefore inadequate.  The nature of this reality is non-local, (to use an inadequate definition !) that is, space and time do not exist as we know them, and so that very small space for the BB cannot even be described in those terms, that is, from the consciousness perspective. That very small space is undefinably infinite..!

So, the arguments of those who are looking to resolve whether the BB or a continuous state, is correct, are based on the assumption of separation, or duality.  They are trying to find a solution on the same level of understanding which asks the question, which Einstein cautioned against.  Without an understanding and experience of the meaning of consciousness, I don't believe the question can be answered, regardless of the funding that is requested below.

What if we were to say that the BB and the continuous state mark the end points of a polarity.  We might then say that neither is true independently, that the whole of the polarity is the real truth..
Thanks, CharlieP, for causing me to try to address this question, which I am sure I have inadequately done..!