Nothing appears in something else...(Antonia Lovejoy) 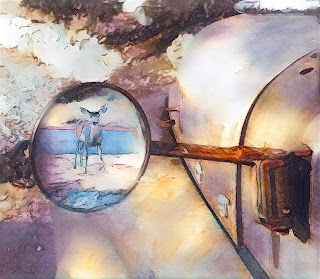 Nothing appears IN something else, it simply appears (seemingly). There is no ether or source, as that would require things/non-things that are separate, ie, source and that which appears in it. Source would be a non-thing, but non-things are things. A thing is that which is believed to have its own existential reality and all supposed things require other supposed things. The illusion of thingness is the illusion of separation.

Trying to see that this is a story is the story. The belief in being able to somehow control the story is the story. The story of desperate seeking is this ever emerging story and so is the shift called enlightenment. This ever emerging livestream is itself a story, as there is no one to pin it down as a truth or a reality and no one to even know it. It plays out similar to a movie, but with no audience, as what would seem to be an audience would be part of the movie. Yet, somehow this is known, but by no one, as the appearance of a belief that there is someone is itself part of the movie. This is utter annihilation, no footholds or handholds. Like free-fall but no faller and therefor no landing. This can't be given or taught or grasped or understood, as the very attempt at grasping and/or understanding is itself part of the scenery. This so-called movie can be compared to a dream. It has no actual reality or unreality as there is no one separate from it to even make such a determination. How is this that’s exactly what is, exactly what’s happening, known? The knowing and the scenery or known are one and the same....not two……no separation whatsoever.