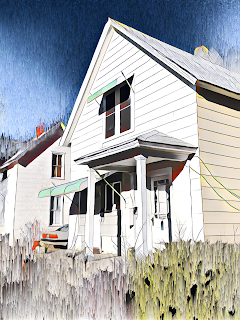 Sent to a friend..
Thought processes are necessary, it seems, as an entry to nonduality,
but the question arises: What is a thought?  A thought is an object,
more subtle than a chair..but still a thought.  Thoughts get settled
as beliefs, and beliefs settle as identities and addictions. Spiritual
traditions and religions have recognized this for a long time, so names
are brought into use, such as God, Consciousness, Awareness,
plus others, which point to that beyond thoughts and objects.  However,
as you can see, there remains a split, a duality, in these usages.
Nonduality recognizes this dilemma, the difficulty of using language,
yet the need to use language!  There are "teachers" who have approaches
which start with a seeker's strong association with duality, and by gentle
steps attempt to coax out the nondual understanding. (Rupert Spira appears
as one of these.).  Another approach is uncompromising, immediately
dismissing the personal "me," attempting to show how a person's
thinking, and questions, all involve an assumption of separation. This
is the Direct Path.  (Tony Parsons is the example.). The Direct Path boils
down to: "Nothing (No-thing) appearing as everything."  That's it!
Or..Nothing being everything (being, not becoming).  The simplicity
tends to mask what already is. Some say that a "shift" occurs. But,
the main thing is the realization of the illusory nature of separation
as an independent reality.
Posted by Charles Coon at 10:56 PM