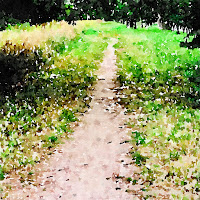 This word of the day
An experience of time
The briefest sort..
I wonder
If this old word
Contained a hint
Of time's illusion
When seen and heard
Standing alone
With hands and bells
On a village tower...

About Ephemeral
You might think of a 'jiffy' as a generally ephemeral — or short-lived, non-permanent — measurement of time, but did you know it's an actual, measurable unit? It accounts for the time it takes for light to travel the distance of a single nucleon.
Did you Know?
While ephemeral has come to describe anything fleeting or not lasting, it comes from a Greek word that specifically means "lasting a day." We now think of ephemeral things as lasting far less time, often just a passing moment.
Posted by Charles Coon at 4:07 PM