Tuesday Talk.  (a discussion group which meets weekly...I am the facilitator of the
discussion on this Topic...)


“Normal is getting dressed in clothes that you buy for work and driving through traffic in a car that you are still paying for - in order to get to the job you need to pay for the clothes and the car, and the house you leave vacant all day so you can afford to live in it.”
― Ellen Goodman

“...it is not to be understood that I am with him [Jesus] in all his doctrines. I am a Materialist, he takes the side of spiritualism; he preaches the efficacy of repentance toward forgiveness of sin. I require a counterpoise of good works to redeem it... Among the sayings & discourses imputed to him by his biographers, I find many passages of fine imagination, correct morality, and of the most lovely benevolence: and others again of so much ignorance, so much absurdity, so much untruth, charlatanism, and imposture, as to pronounce it impossible that such contradictions should have proceeded from the same being.
― Thomas Jefferson, Letters of Thomas Jefferson [Letter to William Short, 13 April 1820]”

“Perhaps the whole root of our trouble, the human trouble, is that we will sacrifice all the beauty of our lives, will imprison ourselves in totems, taboos, crosses, blood sacrifices, steeples, mosques, races, armies, flags, nations, in order to deny the fact of death, which is the only fact we have.”
― James Baldwin, The Fire Next Time

“Men have looked away from themselves and at things so long that they have come to esteem the religious, learned and civil institutions as guards of property, and they deprecate assaults on these, because they feel them to be assaults on property. They measure their esteem of each other by what each has, and not by what each is.”
― Ralph Waldo Emerson, Self-Reliance

“Materialism attempts to reduce conscious experience to physical entities like these particles. As such, it assumes consciousness to be derivative, not fundamental.”
― Bernardo Kastrup, Why Materialism Is Baloney

“Satan's metaphysical existence can never be separated from the politics of domination, specifically colonialism. It provides  the dominant culture with the ability to depict those whom they conquer, oppress, and repress as the Other.”
― Miguel A. de la Torre, Quest for the Historical Satan

“We have a problem with Stuff:  we have too much of it, too much of it is toxic and we don’t share it very well. But that’s not the way things have to be. That’s the challenge our founder Annie Leonard unpacked in her groundbreaking 2007 online documentary, The Story of Stuff, which unleashed a torrent of pent-up demand for honest conversation about our consumption-crazed culture.”
—The Story of Stuff.   (storyofstuff.org)

The discovery that peace, happiness and love are ever-present within our own Being, and completely available at every moment of experience, under all conditions, is the most important discovery that anyone can make.
—Rupert Spira 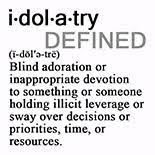