what
is this moving shape
other than our own
self-inquiry..
it is the path upward
or inward
and the recognition
that the movement
of apparent objects
(planets and moons..!)
are not prime movers..
that there is simply
moving as That
which moves
and does not move..
a direct path
to our Self
from what was unknown
to That now known... 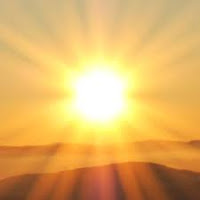 or..perhaps..
the sun stands as
the sacred signature
illuminating itself
and expressed as:
I am..
this experience is
available to all
under the sun
who are poised
to recognize:
appearances of
planets and moons
and me and you
are creations
made only of the
luminous
I am...

“People who do not examine themselves are like people with a sickness that closes off their capillaries and therefore corrupts their blood, causing their limbs to go to sleep and atrophy, and resulting in severe chronic diseases because their humors, and therefore the blood that arises from them, are viscous, sticky, irritating, and acidic. People who do examine themselves, however, including the intentions of their will, are like people who are healed from these diseases and regain the vitality they felt when they were young. People who examine themselves in the right way are like ships from Ophir completely filled with gold, silver, and precious stones; before they examined themselves, though, they were like barges loaded down with unclean freight, carting away the filth and excrement from city streets. . . .”
― Emanuel Swedenborg, Regeneration: Spiritual Growth and How It Works

“The angels sent one of their own down to the church to teach the congregation about redemption. This angel said that the suffering on the cross was not redemption. Redemption was a matter of gaining control over the hells, restructuring the heavens, and restoring all things that had lapsed in both the spiritual and the physical world. Without these achievements, no flesh could have been saved [Matthew 24: 22]. He said that the Lord’s suffering on the cross was the last step in achieving union with the Father at the deepest level. He also said that confusing the suffering on the cross with redemption entails thinking many unworthy and in fact horrendous things about God—that God locked the whole human race into damnation, but the Son took that damnation on himself, which appeased the Father; then the Son’s intercession restored the Father to his divine essence, which is love and mercy; not to mention many other qualities that are very wrong to ascribe to God.”
― Emanuel Swedenborg, True Christianity, vol. 2: The Portable New Century Edition.
Posted by Charles Coon at 8:45 AM