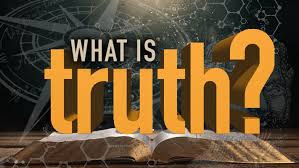 relative truth seems to reign
we know of differing advice:
honda or subaru..marriage or not..
some of those..religiously inclined
look for truth in the vastness of
scriptures and commentaries..
science searches in their observing
for what seems most elegant..
we all may benefit from some timely
advice: movie actors do not find
the Truth...

33 Pilate then went back inside the palace, summoned Jesus and asked him, “Are you the king of the Jews?”
34 “Is that your own idea,” Jesus asked, “or did others talk to you about me?”
35 “Am I a Jew?” Pilate replied. “Your own people and chief priests handed you over to me. What is it you have done?”
36 Jesus said, “My kingdom is not of this world. If it were, my servants would fight to prevent my arrest by the Jewish leaders. But now my kingdom is from another place.”
37 “You are a king, then!” said Pilate.

Jesus answered, “You say that I am a king. In fact, the reason I was born and came into the world is to testify to the truth. Everyone on the side of truth listens to me.”

Funk's (Robert W. Funk is the founder of the Jesus Seminar) Jesus is a person who "caught a glimpse of what the world is really like when you look at it with God's eyes and who endeavored to pass that glimpse along in disturbing short stories we call parables." But, the Gospels often conceal Funk's Jesus, so that he concludes that ""the New Testament conceals the real Jesus as frequently as it reveals him."" Funk proposes 21 theses, among them setting Jesus free from the "scriptural and creedal and experiential prisons in which we have entombed him."
Posted by Charles Coon at 12:45 PM