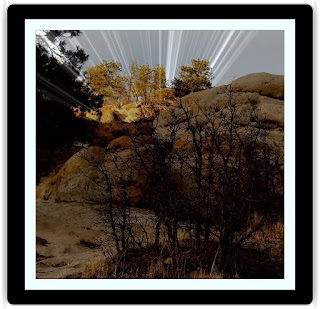 We are living in disruptive times
voices are loud and angered
shouting change and resistance..
Multiple truths seem to thrive
for brief moments within mixes
of contingency and suffering..
Truth has been curtained
in shadows of triviality..
Our most desperate need
is for Truth to be exposed
calling each of us by that
ancient name: I Am..
Such new recognition
must sooth angered voices
dissolving idolatrous lies
in a morning's new light...

PART I — AN OVERVIEW
On balance, the response to the recent election of Donald Trump as the next President of the United States has been extreme, visceral, and loudly vocal, on both sides.  e supporters of Trump have often been nasty and mean in their triumphal attitude, voicing “I told you so!” and “ This  finally serves you right!,” gloating over their unexpected but, they feel, totally righteous and justified  win.  The anti-Trump side has been, if possible, even more vocal, with people tearfully telling of how they threw up, screamed, spent endlessly sleepless nights, all but gave up on democracy and any sort of idealism at all (many of whom had promised to leave the country should Trump win),  noting his election to be a victory of hatred, racism, sexism, xenophobia, and all-round bad taste—and then, usually, vowing to continue “the  ght” and urging their fellow Americans to  get with them, never give up.
Both sides, in my opinion, are caught in too narrow a view.  ere is a bigger picture operating here, and I’d like to outline what that might possibly be. I’ve never heard this particular view I’m about to describe be expressed by anybody, but I believe it represents a larger, more integral view, and as such can be quite illuminating—and liberating.  The pain and suffering that both sides feel is, I believe, the result of identifying with a much too narrow view, and a more expansive stance offers genuine release —while still allowing one to work on whatever side one wishes...

(see link below for what goes between...)

The Likely Future
In the deepest parts of our own being, each of us is directly one with this evolutionary current, this Eros, this Spirit-in-action, radiant to in nity and luminous to eternity, radically full in its over owing overabundance and excessive in its good graces, wildly crashing off the heavens and irrupting from the underworlds, and embracing each and all in its limitless love and care. And the only ones who should be allowed to work politically for a greater tomorrow—and who should thus work—and those who truly understand that it is not necessary to do so; who see the utter fullness of the Great Perfection in each and every moment of existence, and who nonetheless work to trim-tab (or adjust through leadership) the manifestation of more and more and more of the Good and the True and the Beautiful, right here and right now in this gloriously manifest universe, moment to moment to ever-present moment, knowing full well that this entire world is nothing but the dream of an in nite Spirit, yet each and every one of us is directly this very Spirit itself, dreaming the world of our own amazement.
And we can try endlessly and tirelessly to  x this dream.... or we can simply wake up.
Or—the true and ultimate secret—we can discover the integral embrace that actually does both, thus totally freeing us (by ending the dream) and completely ful lling us (by  xing it), miraculously performed fully together in one and the same instant, now to now to endlessly now....

The Birth of a Post-Truth Culture

Back to the post-truth culture that a collapsed green had left us with.  e promoters of Brexit openly admitted that they had pushed ideas that they fully knew were not “true”—but they did so “because there really are no facts,” and what really counts is “that we truly believe this” (as one of them tellingly noted, “I’ve read my Lacan—it’s whoever controls the narrative that counts”—Lacan being a leading postmodernist). In other words, narcissism is the deciding factor—what I want to be true is true in a post- truth culture. Trump doesn’t even try to hide this; he factually lies with gleeful abandon. Reporter Carl Bernstein, of Watergate fame, stated that “Trump lives and thrives in a fact-free environment. No president, including Richard Nixon, has been so ignorant of fact and disdains fact in the way this president-elect does.”

(It looks like, as AI continues its inexorable advance, that within perhaps one hundred years, virtually all human work will be robotized.  is is actually a terri c, near utopian result. After all, work has been taken as an inevitable curse on humans ever since day one. It has always been viewed as the necessary evil that all humans were egregiously condemned to suffer —and hence, in many cases, we  nd things like slavery, or the attempt to outsource the evil task. And now it looks like technology will  nally end that evil once and for all. But the period of actually getting to that point, where virtually one-hundred percent of the population is free of work, will be a time of enormous pain for billions of people, as countless people lose their jobs with nothing to support them.  is is why Silicon Valley—who is, whether it admits it or not, working as fast as it can to put as many people out of work as soon as possible—takes it as a matter of uncontested faith that something like a guaranteed basic income for everybody will soon be put in place, which is almost certainly a necessary program. We’ll return to this.)