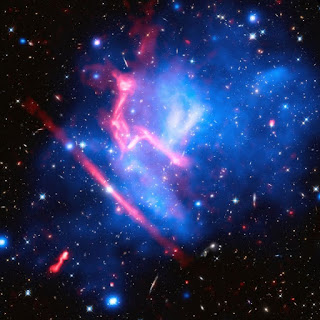 Professor Wheeler gave me the title
this quantum understanding of
life and truth..
His Dragon expresses
at last:  science is discovering
Consciousness..
Consciousness is his Smoky Dragon
and why not call it: I am..
Everything exists in potential in
I am..and we might be scientific
with my other name:  superposition..
Then my pronouncement:
I am a particle..!
and lo it is observed..
Thinking much larger I might say:
I am a Big Bang..!
and lo again..
A departing question for the Professor:
When might we see through our
fog and fear
and absorb your glorious
teaching...?

The question that intrigued the great American physicist John Archibald Wheeler in the last decades of his life was: “Are life and mind irrelevant to the structure of the universe, or are they central to it?” He suggested that the nature of reality was revealed by the bizarre laws of quantum mechanics. According to the quantum theory, before the observation is made, a subatomic particle exists in several states, called a superposition (or, as Wheeler called it, a ‘smoky dragon’). Once the particle is observed, it instantaneously collapses into a single position. For more see:
http://www.dailygalaxy.com/my_weblog/2017/01/the-conscious-universe-a-radical-theory-the-universe-exists-because-we-are-here-view-video.html
Posted by Charles Coon at 10:08 PM