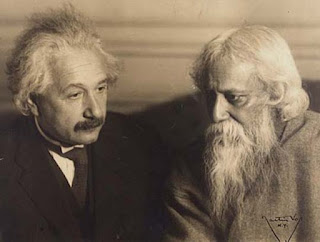 Here we find
our greatest scientist
professing an independent Theorem
outside of thought and perception..
He admits this as belief
and also admits:  this separate reality
he cannot find...in his science..
Our experience tells us:
this old Theorem is thought arising
in infinite Awareness..and there remains..
We search..as did he.. to no avail to find
the Theorem residing outside..
Would it astonish Dr. Einstein
that the Theorem we experience
..as could he..
is made altogether.. of Awareness...?

And when the conversation shifts to the nature of reality — whether Truth can exist independently of humanity — Einstein admits that his beliefs may not rely solely on what he can know through science.
“I cannot prove scientifically that Truth must be conceived as a Truth that is valid independent of humanity; but I believe it firmly. I believe, for instance, that the Pythagorean theorem in geometry states something that is approximately true, independent of the existence of man.”

https://www.scienceandnonduality.com/the-historic-einstein-tagore-meeting-is-truth-independent-of-us/
Posted by Charles Coon at 9:57 AM