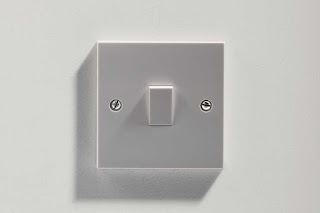 Many examples there are
of consciousness seen from limitation
from the separate self
from the ego..
Duality reigns in these formulations
an on-off switch is their visible icon..
Seemingly never to experience
infinite consciousness
even though all of our
thoughts and sensations and perceptions
are made of the consciousness stuff which is not stuff..
So science continues to search inside the head
for what cannot be found
and the reports provided
are simply thoughts limiting seemingly
but actually leaving consciousness
untouched...

Consciousness feels like an on-off phenomenon: either you’re awake and experiencing the world or you’re not. But finding the button, or even the dimmer switch that allows our brains to move between these states, is tricky.

“Consciousness is not something we see, it’s something through which we see, which makes it challenging to study,” says George Mashour, director of the Center for Consciousness Science at the University of Michigan in Ann Arbor.

One common definition of human consciousness is “the thing that abandons us when we fall into a dreamless sleep, and returns when we wake up”. But it probably comes in different levels. Say I anaesthetise you: you may be able to hear my voice, but not respond to it; you may be dreaming and not hear my voice; or you may hear or experience nothing at all.

Because we are reliant on people’s subjective descriptions of their experience, it is difficult to correlate these different levels of awareness with specific patterns of brain activity. “The bottom line is, I really don’t know if you’re conscious of me, conscious of something else or not conscious at all,” says Mashour.

We do know there are certain brain regions that, when damaged or electrically stimulated, will result in loss of consciousness. The claustrum – a thin, sheet-like structure buried deep inside the brain – is one of them. But there are others, and many of the leading theories that aim to describe consciousness veer away from a single anatomical site being its ...   (New Scientist)