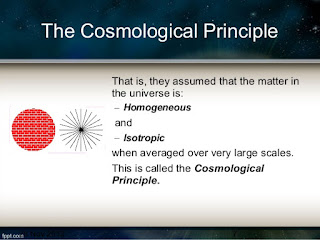 The cosmological principle is usually stated formally as 'Viewed on a sufficiently large scale, the properties of the universe are the same for all observers.' This amounts to the strongly philosophical statement that the part of the universe which we can see is a fair sample, and that the same physical laws apply throughout. In essence, this in a sense says that the universe is knowable and is playing fair with scientists. (Astronomer William Keel in Wikipedia)

As particles race around Saturn at breakneck speeds, their jostling and crashing may look random and haphazard — but a new mathematical theory brings a simple kind of order to the chaos that will help reveal more about rings across the universe.
A group of physicists, mathematicians and astronomers has more rigorously explained a longstanding mystery of Saturn's rings: why the distribution of different particle sizes, ranging from inches to more than 30 feet (10 meters) across, follows a very simple ratio. Their model also suggests why very large bodies in the rings never last long. (Space.com)
Posted by Charles Coon at 8:27 PM