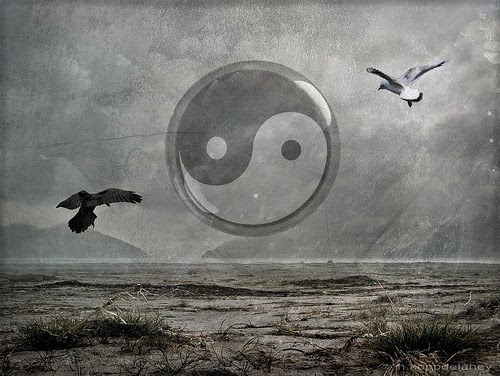 “That all opposites—such as mass and energy, subject and object, life and death—are so much each other that they are perfectly inseparable, still strikes most of us as hard to believe. But this is only because we accept as real the boundary line between the opposites. It is, recall, the boundaries themselves which create the seeming existence of separate opposites. To put it plainly, to say that "ultimate reality is a unity of opposites" is actually to say that in ultimate reality there are no boundaries. Anywhere.”
--- Ken Wilber

“As simple as that sounds, it is nevertheless extremely difficult to adequately discuss no-boundary awareness or nondual consciousness. This is because our language — the medium in which all verbal discussion must float — is a language of boundaries. As we have seen, words and symbols and thoughts themselves are actually nothing but boundaries, for whenever you think or use a word or name, you are already creating boundaries. Even to say "reality is no-boundary awareness" is still to create a distinction between boundaries and no-boundary! So we have to keep in mind the great difficulty involved with dualistic language. That "reality is no-boundary" is true enough, provided we remember that no-boundary awareness is a direct, immediate, and nonverbal awareness, and not a mere philosophical theory. It is for these reasons that the mystic-sages stress that reality lies beyond names and forms, words and thoughts, divisions and boundaries. Beyond all boundaries lies the real world of Suchness, the Void, the Dharmakaya, Tao, Brahman, the Godhead. And in the world of suchness, there is neither good nor bad, saint nor sinner, birth nor death, for in the world of suchness there are no boundaries.”

THE SCIENCE AND MYSTERY OF PERCEPTION
Perception underpins all human behavior and helps interpret sensory information to make sense from the senseless. The brain, to create meaning where there is possibly none, processes perception from the unperceived and thought from the unthinkable. The process of perception is in fact one of creation. What we perceive is not what is out there or within. There is no inherent value in the incredibly complex patterns of light that fall onto our eyes, and yet we see coherent forms and motions that enable us to survive. Exploring the nature of perception can help us glimpse life beyond experiencer and experience, perceiver and perception.
--- Science and Non-Duality Conference (SAND)