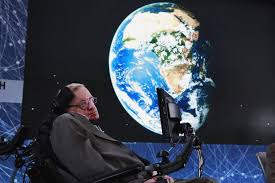 Stephen H has allowed that
which looms in thought
and projects as fear
to a search for relief from
a seeming dark dilemma..
The future is imagined
with calculating vigor
and doleful projection..
A materialist map
sounds with clarity
to the fearful and seeking:
a bold escape from Planet A..
A seeking of happiness
a search among objects
which has occupied our thought
for centuries on end..
But Grace speaks softly
with astonishing news:
There is no Planet B
and..stand ready for this:
there is also no Planet "A"...!


"Back in May, renowned physicist Stephen Hawking made yet another doomsday prediction. He said that humanity has 100 years left on Earth, which knocked 900 years off the prediction he made in November 2016, which had given humanity 1,000 years left. With his new estimate, Hawking suggested the only way to prolong humanity's existence is for us to find a new home, on another planet (alternative source). Speaking at the Starmus Festival in Trondheim, Norway on Tuesday, Hawking reiterated his point: "If humanity is to continue for another million years, our future lies in boldly going where no one else has gone before," he explained, according to the BBC. Specifically, Hawking said that we should aim for another Moon landing by 2020, and work to build a lunar base in the next 30 years -- projects that could help prepare us to send human beings to Mars by 2025. "We are running out of space and the only places to go to are other worlds. It is time to explore other solar systems. Spreading out may be the only thing that saves us from ourselves. I am convinced that humans need to leave Earth," Hawking added.