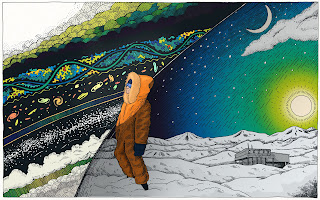 In the science of our time
there is a reported flagging of expectation
for new cosmology discovery..
With science's point of view
not altered since the Greeks
a continuing immersion in
objectivity and assertions verified..
Despite powerful instruments  seeing
the birth of inflation in the big bang
a suggestion of multiple worlds
this explosion of diversity
also suggests futility in discovery
of newfound truth..
So..
we may  be waiting for science
to redirect its gaze with new purpose
of finding that which is observing
the vastness which centuries have seen..
Turning around to discover
a background awareness experienced
at last as real Seeing...!

In the beginning
Cosmology has been on a long, hot streak, racking up one imaginative and scientific triumph after another. Is it over?

A dominant, infinitely flexible multiverse theory could make it easy not to strain for the next leap forward. It could lead to a chilling effect on new ideas in cosmology, or worse, a creative crisis. Steinhardt thinks we’re already there. ‘Andre Linde has become associated with eternal inflation because he thinks the multiverse is a good idea,’ he told me. ‘But I invented it, too, and I think it’s a horrible idea. It’s an emperor’s new clothes story. Except in that story, it’s a child who points out that the Emperor has no clothes. In this case, it’s the tailors themselves telling us that the theory is not testable. It’s Guth and Linde.’

Cosmologists should be searching for an alternative theory. They should not be waving away problems with the multiverse
~~~an excerpt from:
https://aeon.co/essays/will-we-ever-understand-the-beginning-of-the-universe?utm_source=Aeon+Newsletter&utm_campaign=c5b475c241-Weekly_newsletter_Friday_1_Jan_201612_23_2015&utm_medium=email&utm_term=0_411a82e59d-c5b475c241-68637757