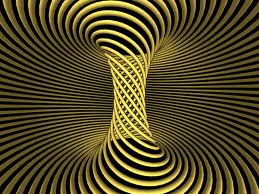 Imagine, if you will, a swirling energy
Dancing around a core
Forever compelled to enter one end
Of a doughnut-like hole
Converging, traveling up and
Flinging out again in a creative burst
Spreading in all directions
But pulled by an irresistible force
To follow semi-circular paths
Back to the base
There to be reunited, renewed and then
Flow up and out again
And around and back
And up and out
And around and back
Again and again
And --

Are black holes in space
Magnetized entrances into a doughnut hole
where compressed energy races up the core and
Spews out in a sprawling light show of universes
Until it is all called back to the base
To be fused again, transformed,
Recreated and sent up and out
And around and back
Again and again
And --

by my friend,  Thelma Peck