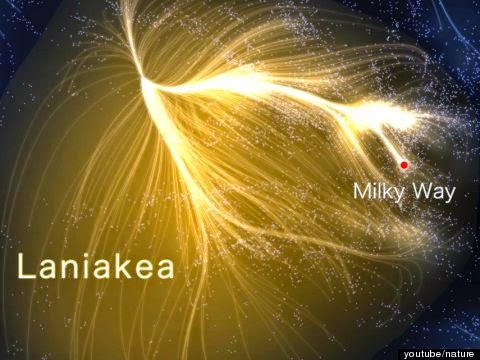 Until now, the Milky Way was believed to be one galaxy in the 2,000 that make up what's known as the Virgo "supercluster." But as the new map shows, the Milky Way's 100 billion stars are actually part of something 100 times bigger: a supercluster of galaxies astronomers have christened Laniakea, meaning "immense heavens" in the Hawaiian language.

this hawaiian dream
of a feathery supercluster
connecting strands of light..
one feather for now
but is this one
of one bird
in one flock..
our minds wander
and weaken
no answer there
Who am I...?