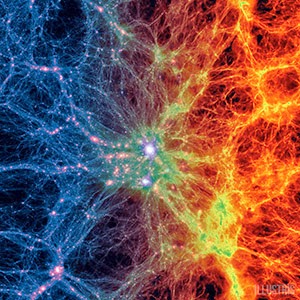 With streaming code
and superfast computing
we can now watch
the amazing evolution
of a galaxy..this is
astronomy without
observation..
With our senses and
telescopic extensions
we process light from
vast distances..a method
ancient and linear..
But now a method
much more profound:
black energy and light
large and small scale
a simultaneous dance
embedded in code..
Might the question
arise: is our code
an image pointing
to a grander Code...?
polarityinplay...

Everyone loves cartoons, even cosmologists. They just call them simulations.

Now, one of the great triumphs of modern cosmology—our understanding of how the universe evolved its kaleidoscope of stars, worlds, and galaxies—has been visualized in its first realistic simulation:

“Until now, no single simulation was able to reproduce the universe on both large and small scales simultaneously,” Mark Vogelsberger of MIT and the Harvard-Smithsonian Center for Astrophysics, who led the simulation team, says in a statement. Using a computer program, the team grew the virtual galaxies in simulated time, starting from 12 million years after the big bang (which kicked off about 13.8 billion years ago), they report in a study released this week by the journal Nature.

Named Illustris, the simulation built its universe out of 10 billion tiny cubes stuffed inside a virtual box measuring some 350 million light-years on each side.

Stuffed inside those cubes was simulated cosmological gas, which cooled, compressed, and formed filaments of galaxies that resemble ones seen today. As it evolved, its early cosmos resembled the real one, which is filled with small, energetic galaxies revealed by Hubble Space Telescope observations.

“If this all sounds somewhat complicated, do not be fooled: It is extremely complicated,” University of Maryland astronomer Michael Boylan-Kolchin, says in a commentary accompanying the study.

The simulation still has a way to go, Boylan-Kolchin adds, since it does not produce the biggest of black holes seen in the early universe or the dwarf galaxies that circle the Milky Way today. But thanks to the simulation, he says in the commentary, “creating a realistic virtual Universe of gas, stars, black holes and dark matter is already a reality. ”