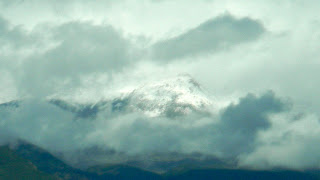 “The desire to live life to its fullest, to acquire more knowledge, to abandon the economic treadmill, are all typical reactions to these experiences in altered states of consciousness. The previous fear of death is typically quelled. If the individual generally remains thereafter in the existential state of awareness, the deep internal feeling of eternity is quite profound and unshakable.”
--Edgar D. Mitchell

"Dogmas–religious, political, scientific–arise out of erroneous belief that thought can encapsulate reality or truth. Dogmas are collective conceptual prisons. And the strange thing is that people love their prison cells because they give them a sense of security and a false sense of “I know.”  "
--Eckhart Tolle

"The universe does not exist 'out there,' independent of us. We are inescapably involved in bringing about that which appears to be happening. We are not only observers. We are participators. In some strange sense, this is a participatory universe."
--John Archibald Wheeler

We live on an island surrounded by a sea of ignorance. As our island of knowledge grows, so does the shore of our ignorance.
--John Archibald Wheeler

"Our soul is cast into a body, where it finds number, time, dimension. Thereupon it reasons, and calls this nature necessity, and can believe nothing else."
----Blaise Pascal

"As soon as man began considering himself the source of the highest meaning in the world and the measure of everything, the world began to lose its human dimension, and man began to lose control of it."
--Vaclav Havel

“We have been to the moon, we have charted the depths of the ocean and the heart of the atom, but we have a fear of looking inward to ourselves because we sense that is where all the contradictions flow together.”
― Terence McKenna

“There is almost a sensual longing for communion with others who have a large vision. The immense fulfillment of the friendship between those engaged in furthering the evolution of consciousness has a quality impossible to describe.”
― Pierre Teilhard de Chardin

“One does not become enlightened by imagining figures of light, but by making the darkness conscious.”
― Carl Jung

“Why may we not be in the universe, as our dogs and cats are in our drawing rooms and libraries?”
― William James

“Hell, in my opinion, is never finding your true self and never living your own life or knowing who you are.”
― John Bradshaw

When you become aware of silence, immediately there is that state of inner still alertness. You are present. You have stepped out of thousands of years of collective human conditioning.
--Eckhart Tolle