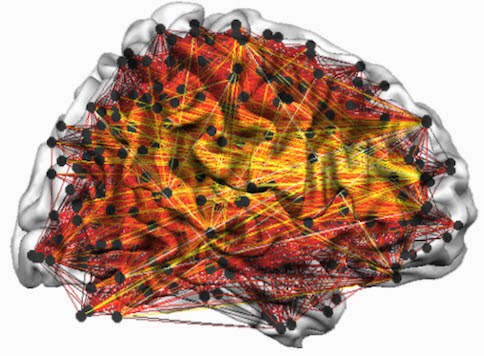 With respect we can notice
research locating consciousness
here close by within our brain..
Diligence has located networks of
solid character in our headspace..
These precisions persuade some that
research paths are leading to the
illusive doorway of truth..
In the meantime such persuasions
rise to obscure the doorway
used by some to gain glimpses
of consciousness not limited..
Yet might this network news
reporting of unified smallness
on a day quite soon
point to the light
leaking through that
doorway...

Network theory suggests consciousness is global in the brain
March 16, 2015
The black dots correspond to the 264 areas of the cerebral cortex that the researchers studied; the lines correspond to the increased strength of the functional connections between each of these brain areas when subjects consciously perceive the target. The “hotter” colors are associated with stronger connections. This figure illustrates that awareness of the target corresponds to widespread increase in the strength of functional connections. (credit: Marois/Godwin).
Vanderbilt University researchers have found evidence that awareness or consciousness results from widespread communication across sensory and association areas of the cortex — challenging previous hypotheses that changes in restricted areas of the brain were responsible for producing awareness.
“Identifying the fingerprints of consciousness in humans would be a significant advancement for basic and medical research, let alone its philosophical implications on the underpinnings of the human experience,” said René Marois, professor and chair of psychology at Vanderbilt University and senior author of the study.
references:
Douglass Godwin, Robert L. Barry and René Marois. Breakdown of the brain’s functional network modularity with awareness. PNAS March 10, 2015; DOI: 10.1073/pnas.1414466112
Posted by Charles Coon at 5:46 PM